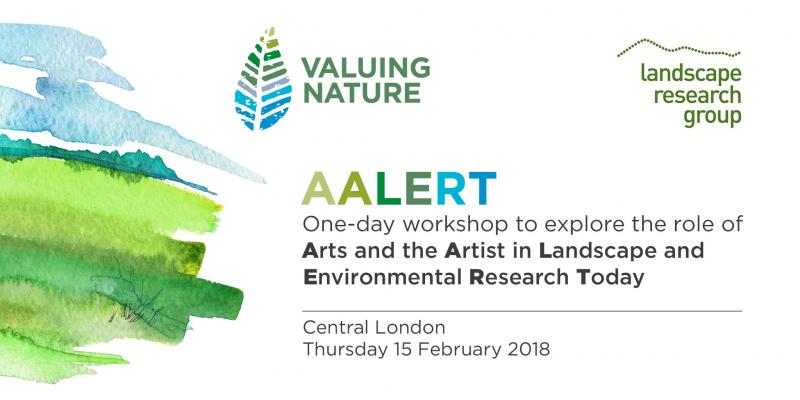 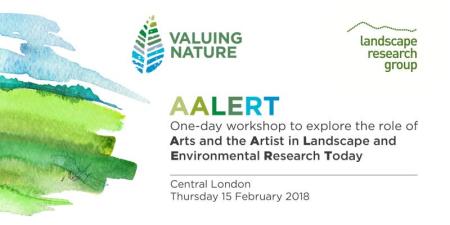 This is a quick and personal reflection on the Art and Artists in Landscape and Environmental Research Today workshop (AALERT) held at the National Gallery London 15 Feb jointly sponsored by the Landscape Research Group and the Valuing Nature Programme of the Natural Environment Research Council (NERC), and supported by the Landscape & Arts Network. This is not an overview of the content of the day, including excellent presentations by Prof Stephen Daniels, Lise Autogena and Joshua Portway or the many threads and contributions. The intention is to focus on the key points in relation to the stated aim – understanding the contribution artists and art make to landscape and environmental research. We understand a more detailed summary will be published by the organisers.

The day brought together artists with natural and social scientists, and humanities academics. The key question was and remains what contribution art and artists can make to landscape and environmental research. The day was organized around questions of agency, value and how to embed artists with other disciplines. The fundamental problem is that many people don’t understand artists’ research. That being said, everyone ‘knows’ that there is a contribution. Most people don’t agree with Lewis Wolpert when he said,

“Although science has had a strong influence on certain artists – in the efforts to imitate nature and thus to develop perspective or in the area of new technologies – art has contributed virtually nothing to science.” (Wolpert, 2002)

“In the first place, the scene of research, centred on academic and scientific communities, will encounter new actors who will have to be considered no longer as objects of study, but as inquiring subjects themselves: the artist and the artist-as-researcher…. This means that, fourthly, research cultures will potentially be enriched with new narratives, discourses and modes of knowledge including knowledge of making (techne) and knowledge of the value systems that inform making (phronesis).” (Coessens et al., 2009, pp91-92)

This point is important because art and artists are often spoken for and about not least by art historians but also by anthropologists and other social scientists. We might argue that these interlocutors use evidence in forms which are ‘inter-operable’ with other forms of research evidence. The manifestation of artists’ research is at its core about making room to re-experience the world as (slightly) different, to pick up on Clive Cazeaux’s articulation. This ‘seeing it differently’ – and here we mean seeing in the widest sense, as in ‘understanding the possibility that it isn’t as we assume’ – is maybe neither quantitative nor qualitative. The concepts we use to understand the world shape both how and what we perceive. And also form how we make the world. This critical insight is valuable.

To be clear there are at least two meanings of research when used by artists (and even artists in the room conflated these). Pretty much all contemporary artists do research in the process of making work. In particular artists doing work with other disciplines, in public places, etc and in particular in landscape and environment, do a lot of research across a whole range of dimensions – social, historical, geographical, geological, ecological, etc – as preparation for making work. Sometimes this involves discovering new or forgotten things and sometimes it is functionally ‘familiarisation’ and assemblage of knowledge about a place or issue. Some artists do research informed by the same criteria as other academics – making a contribution to knowledge characterised by ‘originality, significance and rigour’. Artists don’t have to be in academic positions in research active institutions to do this, and in fact there is a long history of artists shaping our understanding of the world and sharing methods and processes so that others can learn. One difference, in addition to going beyond the specific project needs, is that the latter has a public dimension to the process and product which enables others to learn from it. Another difference is the positioning of the work with a social historical discourse. This in turn is one of the validations of the originality, significance and rigour requirement (which has been standardised over 26 years of UK research assessment).

The lack of awareness of this and its manifestation in artist-led work receiving 4* ratings in the 2014 REF was a cause of some frustration during the day.

Fundamentally each discipline and practice has a different way of knowing the world which are all equally valid. The challenge is that the ‘wicked’ problems we are facing including climate disruption, biodiversity loss and a warming planet require us to work together across traditional boundaries in teams. And teams need to understand each other. A quick rehearsal of Basarab Nicolescu’s formulation is useful (Nicolescu, 1997). He starts from the point that disciplines are valuable in themselves. He then talks about multi-disciplinary in terms of co-ordination of different disciplines’ methods; interdisciplinary in terms of learning from each other and hybridising; and trans-disciplinary as working across different levels of reality particularly where they are incommensurable e.g. between the scientific and the spiritual or data and emotions. He suggests that artists are particularly good at this.

Collins cited John Roberts, offering an articulation of this particular quality and its complexities. Roberts argues that art has a complex relationship with society at once enmeshed and autonomous. In particular he argues that, “one of the still operative functions of the artist – exploited extensively at the moment, as it is – is his or her ability to work with, reflect on, move through various non-artistic disciplines and practices without fully investing in them.” (Roberts, 2016, p112). Roberts calls this ‘adisciplinarity’ and he says,

“[t]his is because it is not the job of art to defend or extend the truth claims of a particular discipline, but to reflect on the discipline’s epistemological claims and symbolic status within the totality of non-art/ art disciplines and their social relations. When art draws, for example, from a particular scientific discipline such as physics, this is not in order to defend the truths of a particular branch of physics, but, rather, to use such truths as a reflection on physics as such, or as a means to reflect on the truth claims of other disciplines and practices.” (Roberts, p114)

This clarifies another aspect of discussion which focused on agency and autonomy. For artists to do what they do in terms of Roberts’ description, in terms of ‘seeing and/or making it differently’ they need a degree of autonomy, yet at the same time to work with others. This distinctive position, often within a team, is challenging and needs to be valued by others (including other academics but also funders and policy-makers), supported and given space. It raises anxiety in a risk averse culture. But it is fundamental to the contribution that art and artists can make, even if it is an idea that many struggle to recognise or understand how to ‘operationalise’.

One aspect which relates to this is that as artists (and curators, producers, writers) we have become very good at learning the languages of other disciplines and practices, their forms of evidence and their policy frameworks. The converse of this is that we don’t seem to have been very effective at articulating our forms of knowledge to other researchers and practitioners (this problem is as true in the context of arts and health as it is in research-led work).

Another related complexity flushed out during the day was that the conditions of participation need to be attended to, and the Artist Placement Group was referenced, including John Latham’s conceptualisation of the ‘Incidental Person’ as well as his and Barbara Steveni’s operating principles of Open Brief leading to Feasibility Study, the need for a willing host, and the need for commensurate pay (Steveni, 2003). This methodology has been developed within the arts to structure conditions for work in non-arts contexts.

This rich and provocative event opened up real questions on the contribution, conceptual and practical, of artists to landscape and environmental research. It opened up issues which need deeper reflection and consideration because without question the ‘wicked problems’ are increasingly the focus of research and policy. Whilst the Valuing Nature Programme may be nearing the conclusion of this phase of work it is highly likely that the next cycle of research will be larger with more challenging issues to address and it would be good to see more artists as Principal Investigators, Co-Investigators and Research Fellows helping to shape these projects, not just communicate the findings.

“But while mainstream science continues to think of art as a medium for the communication of its own findings, it is now art, rather than science, that is leading the way in promoting radical ecological awareness.” (Ingold, 2017)

Ingold is echoing Roberts’ construction of arts adisciplinary role, pointing to the ways in which artists are re-imagining, even re-creating, our relationships with ecologies whether that is in the form of greater awareness and sensitivity or activism (and a range of other possibilities). All of these practices draw on the truths of various ecological sciences but also ask whether those truths are sufficient to articulate the value of the ecologies they claim to explain. The activists also use art to engage with the symbolic status of both the art and non-art social constructions (e.g. the social license to operate provided to the fossil fuel industry through sponsorship of cultural institutions). But that’s another subject.

Steveni, B. 2003. Repositioning Art in the Decision-Making Processes of Society. In Interrupt Symposia. https://web.archive.org/web/20090107002604/http://interrupt.org.uk/symposia/educator/repositioning-art/ accessed 19 February 2018

5 thoughts on “Report on AALERT”