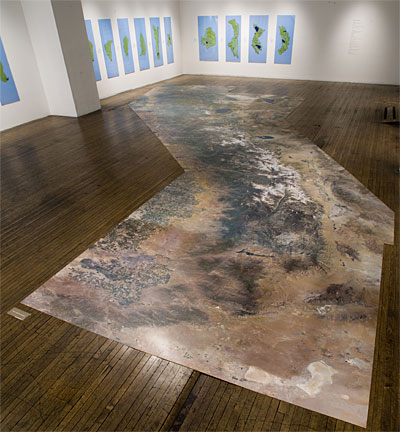 If you are in New York in the next month, this is a ‘must see’ show.

[The Harrisons’] work is a prime example of the potential of ecoart to create knowledge that promotes cultural change. Ruth Wallen, Leonardo XLV, no. 3, 2012

Helen Mayer Harrison & Newton Harrison are the first recipients of the Corlis Benefideo Award for Imaginative Cartography, presented at the Annual Meeting of the North American Cartographic Information Society (NACIS) on October 9, 2013 in Greenville, South Carolina.

Ronald Feldman Fine Arts will exhibit Global Mapping, an overview of the life-long work of Helen Mayer Harrison and Newton Harrison, pioneers of ecologically-oriented art, whose visionary proposals have influenced long-term public policy in the United States and abroad. For more than forty years, the Harrisons’ expansive practice, realized in collaboration with experts from other disciplines and often commissioned by government and art institutions, has been to map out specific geographical areas at ecological risk to encourage public discourse and community involvement. Their impassioned works serve as both a meditation on global ecology and also as a futuristic vision, often with proposals for environmental change and recovery.

The Harrisons’ mapping – on large wall panels and synthesized with aerial photographs and narrative text of Socratic reasoning – dominates the exhibition space. The artworks are selected from large-scale installations of projects from the early seventies to the present. Similar in appearance to the wall panels, a floor panel allows the viewer to walk on a topographical map of the Sierra Nevada mountain range, a work from Force Majeure, the Harrisons’ current on-going series which addresses the effects of global warming on an unprecedented scale.

Earlier works, From The Lagoon Cycle (1974-1984), Law of the Sea Conference from the 1976 Venice Biennale, and Baltimore Promenade (1981), focus on watershed restoration, agricultural and forestry issues, and urban renewal, as well as providing a history of the Harrisons’ engagement with the topic of global warming.

Reflecting the Harrisons’ international perspective and the scale of their research, the exhibition includes projects that study the eco-systems of large bodies of water from around the world: the Sava River in former Yugoslavia, the Yarkon River in Israel, and the Salton Sea and the Bays at San Francisco in the state of California. Their titles often incorporate visual metaphor to define and unify the large geographical areas under consideration: A Vision for the Green Heart of Holland, Peninsula Europe, Greenhouse Britain, and Tibet is the High Ground.

Helen Mayor Harrison and Newton Harrison, Emeriti Professors in the Visual Arts at the University of California at San Diego and currently research professors at University of California at Santa Cruz, have been represented by Ronald Feldman Fine Arts since 1974. The recipient of numerous awards, they delivered the convocation address at the College Art Association 100th Year Anniversary Conference in 2011. They have exhibited internationally, and their work is in the collections of many public institutions including The National Museum of Modern Art, The Pompidou Center, The Museum of Modern Art, and The Chicago Museum of Contemporary Art.