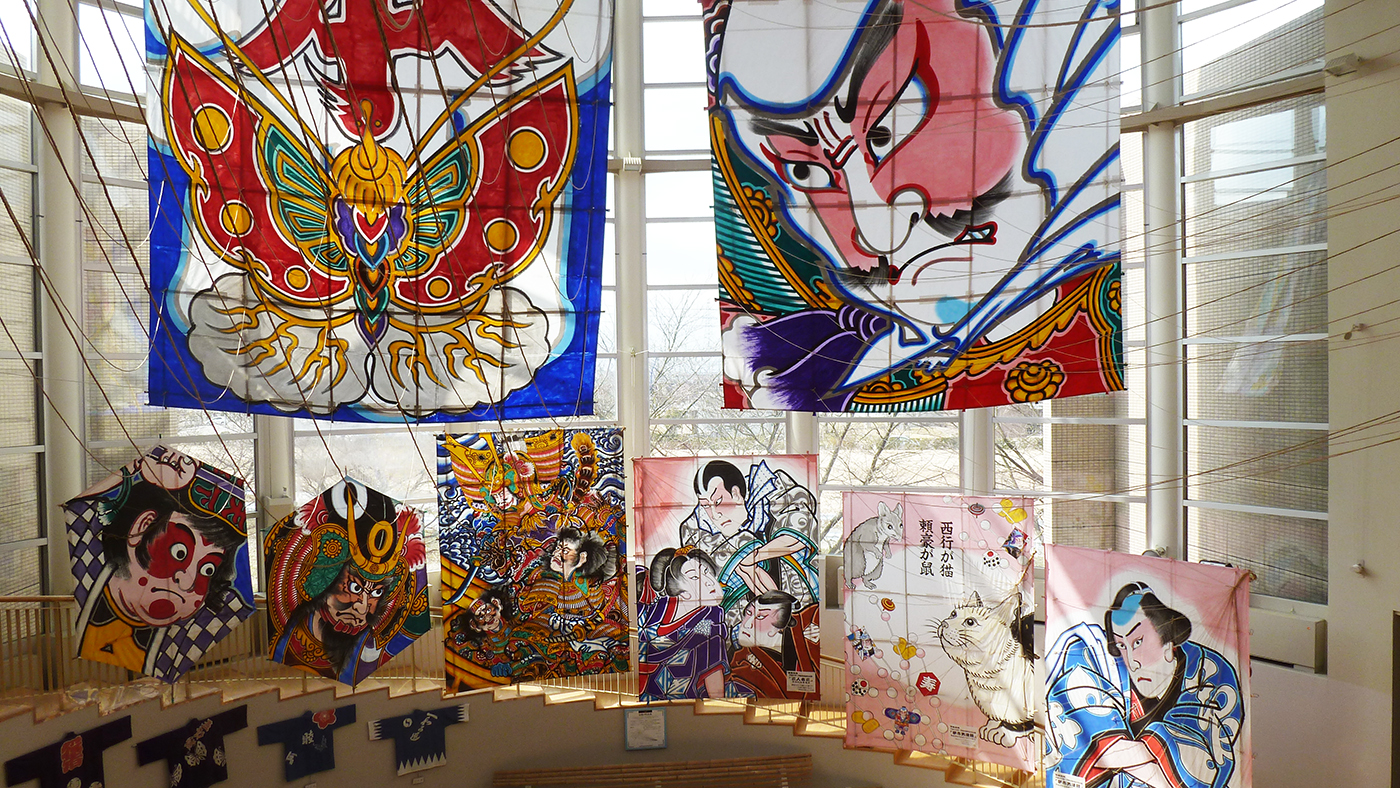 I have come for a short weekend break to the port city of Niigata on the West coast of Japan at the mouth of the large Shinano river which also serves the huge areas of rice fields that lie between here and the inland mountains.

My first day here brought two cultural experiences that took me to the extreme ends of cultural life in Japan.

With several major attractions shut for renovation and total re-hangs, I decided to head out of town to the Large Kite Museum. With not so much English being spoken here finding my way on local buses was the first challenge. And with only a very rudimentary tourist map to assist me, knowing where to get off the bus proved an even greater problem. But it was certainly worth the effort.

As the only visitor in the Museum on a Saturday afternoon I was given privileged treatment. I had a private viewing of a 3D film in English outlining the annual Shirone fighting kite festival. It is a year long community effort to construct and paint the massive 7m x 5m, 30kg, bamboo and paper kites. The strength of the handmade grass ropes that are needed to keep these massive constructions airborne is critical to the outcome of the battle. It takes great skill that is passed down through the generations.

With teams on either side of the Nakanokuchi river the aim is to catch the opposition by twisting lines so that both kites come down in the river. This is when the real battle begins as both sides enlist their whole community to tug the kites towards their bank of the river. The winner is the team with the fewest broken ropes. It can take 30 to 40 people on the ropes to get the kites airborne and hundreds of all ages pulling together when the kites are in the water.

The day before the main battle there is a children’s festival with smaller kites and a large street procession. As the film points out, these battles which are always carried out in a sense of friendly rivalry, are important in keeping old traditions and skills alive in a way that is still embedded in the community as well as promoting a genuine inter-generational unity in their society.

The Museum itself also has examples of kites from around the world, and the curator who came and laid out some kites for me to see, said they had an example of a traditional English kite. I protested that I didn’t think we had any but had to laugh when he showed me the example. It was a cane bent over and tied into an oval shape with newspaper pasted over. It had along string tail with twists of newspaper slotted into the string. I do indeed remember making a kite exactly like this, as a child in the frugal years at the end of 40’s and early 50’s. There were a few other examples of small kites made with leaves and feathers. Such simple and natural toys.

My second cultural experience came late in the afternoon when I set off to visit the Annual Saki festival held in a very large conference venue on the river banks of Niigata City. The hundreds of people walking (or more accurately staggering) towards me as they left the event was a clue to what was to follow.

I had originally intended to buy a ‘tasting ticket’ where you are given a label and small ceramic Sake cup in which to freely sample up to 900 of the varieties on display. But one look down into the main hall quickly decided me otherwise. Thousands of people formed what looked like a monumental scrum gathered around the drinking stalls. It seemed quantity rather than quality was the aim. The palette would be so quickly flattened that I doubt it would be possible to distinguish one variety from another anyway.

Going down into the hall as a visitor I was constantly jostled by inebriated drinkers and the smoke and food smells from the surrounding stalls was sticky and oppressive, nothing like the aroma of the interesting and subtle food I have been eating while here.

The Japanese make the most clear and amusing illustrated public signage. You can never doubt that you will drown, crash you bike or walk in dog poo, but the ‘no fighting’ signs at the Sake festival really did give an idea of what might happen as the evening progressed.

Sake is the national drink made from fermented rice. Like wine it ranges from sweet to dry depending on brewing times and water quality. It is also made into rich fruit liqueurs and can be added to many cooking sauces and dishes. Mr Sato owner of our local Yamatogawa brewery and many members of the public have donated so much Sake to our events that we need some extra gatherings just to use it all. In Kitakata generosity and levels of support for our projects are both humbling and inspiring.

Finally after reaching Kitakata again, we are faced with the news that there has been an electricity failure at the crippled Daiichi nuclear plant. It seems they do not know the cause which seems even more worrying. The online Japan News Today says:

“Electricity has been cut to pools used to cool spent fuel at the reactor 1, 3 and 4 units” as well as to the equipment to treat contaminated discharge including radioactive cesium, TEPCO spokesman Kenichi Tanabe said.

However, the incident had not so far affected cooling-water injection to the number 1, 2 and 3 reactors, which suffered core meltdowns soon after the start of the March 2011 nuclear crisis, he said.

The temperature at the pool for spent fuel from reactor number 4 was believed to be the highest and slightly above 25 degrees Celsius (77 degrees Fahrenheit), still well below the safety limit of 65 degrees, he said, adding it was rising by 0.3-0.4 degrees every hour.

If the system is not restored, it will take four more days for that pool to reach the limit, he said.

“We are trying to restore power by then,” he said, adding the deadline would be about 14 days and 26 days for the other two.

This was on breakfast news today (Tuesday 19th) but I have the feeling that the people are almost numbed to disaster now. There are endless TV programmes about potential Tsunamis and personal security, yet I find that most of the people I speak to have no faith in the new Government to handle these situations. They believe they will bend to the industrial companies desire to re-open the nuclear plants, and I have seen for myself that some sea defenses broken two years ago have not even begun to be restored. There are some small anti-Government public protests in Tokyo, but few people seem to believe it will make any difference.

Based purely on the people I talk to here, I find that while they are individually inspiring, the country seems to be still struggling to cope with all that has happened and are a long way from finding a constructive way forward.

I fly home in 3 days time and by then the first cooling deadline will have been reached. Let’s hope there is only good news to report.

One thought on “From Fukushima – Pt.6”